The primary reason I am putting together this blog is to  provide a resource to people who attend my history classes  at conferences  or have gotten just a smidgen of history in my continuing ed classes and are asking for class notes or more information.

So here I will run down the information I cover during the first slide  of most of my history classes.  Hopefully, the explanation of how I use  certain terms will be useful to people who haven't been to one of my classes, as well.

As many (most?) anthropology students interested in medical anthropology , I was assigned Arthur Kleinman's Patients and Healers in the Context of Culture.  I love to classify things, so I was drawn to the way he breaks down the various components of healthcare in societies.

Not everyone uses this system. Many historians lump popular health practices with the ritual healing practices and call it all “folk medicine” which causes a lot of confusion. Herbalism somehow became associated with neopaganism, when many, many god-fearing  women prepared botanical remedies. It’s just the way things used to work.  Not every great-grandmother was a ritual healing specialist but almost every single one of them was a home health provider.

I had to tweak a couple of things to line up with the language modern herbal practitioners and to avoid what I consider to be appropriative language.  So this is how I teach it at conferences.

Knowledge of this nature is passed down through the generations or through community skill- sharing networks. In less educated populations most of this transmission is  through word-of-mouth, but it was also recorded by literate women in the form of manuscript recipe books and journals. So we have an interesting paper trail of the kinds of household remedies used by women throughout history.

Gradually people of means started buying over-the-counter herbal preparations from apothecaries.  These days self-medication has been co-opted by the pharmaceutical/nutraceutical companies, but it is still the primary form of healthcare in this US.  Every time someone takes an ibuprofen for a headache, they are practicing domestic medicine.


Folk Sector - Ritual Healing Specialist*
In many cultures we find early healers working from a framework influenced by indigenous cultural ideas about naturalistic illnesses. (This is a term used to describe illnesses whose causes are thought to be attributable to the supernatural causes.)   Using charms or belief in pisreóga does not automatically mean a person has assumed this role.

The specialist in a community is the  person to whom the skilled domestic caregivers turned when they were in over their head. The ritual healing specialist of the community works as a conduit of  otherworldly healing power.  They might speak pisreóga, charms, incantations, or prayers while leading their patients through elaborate  healing rituals.  They might work rituals with sacred herbs, but they also work with other natural items like with sacred water, stones, or amulets. They might be a priest who performs an exorcism. The point is these healers have far more in their repertoire than the therapeutic delivery of plant medicine.

There has been a lot written by anthropologists about the ritual practices of native groups all over the world. The problem with reading those works is that we cannot always trust that the contextual observations made by those researchers were accurate. Their observations were often informed by  violent prejudices and researchers frequently took things out of context.

For example, US government ethnographers sent to gather information about various native groups used terminology about witchcraft to describe their practices which was wildly off-base.  I would argue that Dineen is a little too free with his use of the word "witch" in his dictionary as well based on the fact that historians like Ronald Hutton argue that there was no word in the Gaelic language for witch. And then there is dear old John Riddle who needs to be taught some basic women's health, so he understands causing an abortion is not the only reason a woman might use an emmenagogue.

*This group is more commonly referred to as “folk healer” but that word has been conflated with herbalist too often. I feel it is easiest when presenting at herbal conferences to distinguish sharply between the two sectors.

Professional Practitioners
The professional healthcare sector is comprised of trained providers such as medical physicians, naturopathic physicians, medical herbalists, chiropractors, and so on. They engage in their practice as a means of supporting themselves financially — either by charging clients or through patronage.

Historically achieving professional status may have involved academic training, apprenticing oneself to an established practitioner, or both. If you think about this it is basically how the AMA works modernly. You go to school and your residency is your apprenticeship.  I think that historical analogy has a lot to do with how medical schools abuse residents. 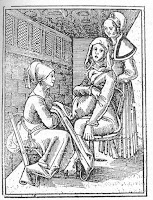 Midwifery
To me midwives hold in a confusing place in all of this.  Technically, the term translates simply to “with the woman” and was used to refer to the professional  in the community who helped deliver babies.  But many midwives were not professionals in the modern sense.

My great-grandmother Ralston delivered babies in her community for decades. She was also known for sharing her knowledge of  home remedies and training younger women.  We are fairly certain no one ever paid her, except maybe with some eggs or a chicken.  So I consider her to be a part of the popular healthcare culture of her community, but other people might argue that classification.


Final Words
For those of you who have attended one of my classes, I hope that you were inspired to do your own research.  That was the whole point.  I encourage people to research their ancestors use of herbs, because a very wise academic advisor once gave me that advice.

So yes, this blog will be UK-centric, but I am simply focusing on the knowledge that informed my ancestors.  I hope that people from many different  backgrounds find their stories.  I would love to hear them, but they are not mine to tell.

I took advantage of my academic access when I was in college to download pdf scans of  dozens of old herbals  and cookbooks published in the 16th and 17th century from EEBO but more and more of them have been transcribed and are available free to the public.

Many medieval scholars have posted translations of much older cookbooks which contain medicinal recipes as well. There has never been a time when researching primary source documents has been this accessible to people of few means due to the digitization of manuscripts.  You can do this research too.

Don't forget  though that you must understand context.  Reading modern experts journal articles, essays and books will undoubtedly help you to clear up any pseudohistory you might have been fed.