Aqua vitea 🜈 is Latin for “water of life” was also called “spirit of wine” or “rectified wine.”. It was made by distilling wine made from white grapes as opposed to Irish Uisce beatha which was distilled from barley malt.  You will find references to “small spirit of wine” which has a lower alcohol content.

Alembic or  Limbeck 🝪 is a distillation apparatus more commonly called a still. In early modern times people used a variety of materials to make stills including glass, pewter, brass and less commonly copper.Barm is the frothy, yeasty substance that accumulates at the top of the wort during primary ferment. It was a common leavening for bread during the Middle Ages.
Cordiall meant that something was beneficial or soothing to the heart, often on an emotional level. There were even devotional books named The Soul’s Cordiall. This is probably why there is some general confusion about the term cordial, and in the UK it mostly refers to non-alcoholic beverage syrups.
Cordiall water was a spirit said to be good for the heart, many seemed to have ingredients meant to soothe the nervous system.
Draught is a term derived from the Old English term dragan which means to pull draw or drag. It boils down to meaning how much you take into your mouth and swallow in one drink.
Liquor has varying meanings. In the UK liqueur refers to a cordial (beverage syrup) which has alcohol added. Elderflower cordial is one of the more commonly sold. Liquor can simply refer to the liquid in a recipe so you have use context to determine meaning.
Mead is a solution of honey and water that has been fermented into an alcoholic beverage. Melomel is a mead made with fruit added, while a metheglin is spiced mead which was sometimes used medicinally especially by Welsh physicians.

Sack is sweet wine fortified with brandy. Similar to modern sherry, but probably a bit stronger.
Spirit is usually an infused wine that has been distilled and concentrated such as absinthe or chartreuse.
Usquebaugh (Uisce beatha) or whiskey is a strong liquor distilled by the Irish from a fermented barley mash. It is not the same preparation as aqua vitea. It was first documented in the Annála Chluain Mhic Nóis which states that in 1405 a noted chieftain drank too much on Christmas and died.[1] Exchequer Rolls of 1494, King James IV of Scotland awarded one Friar John Cor a large amount of malt to brew aqua vitea.[2]
Wort is an Old English term used to refer to herbs, but it had long gone out of use outside of being incorporated into the common names of some medicinal plants. In the Middle Ages wort refers to the infusion of ground malt or other grain made to be fermented into ale.

[1] Mag Eochagáin, Conall. Annála Chluain Mhic Nóis; Being Annals of Ireland, from the Earliest Period to A. D. 1408. Translated into English A. D. 1627. 1896 Reprint. Dublin, Ireland: Printed at the University Press for the Royal Society of Antiquaries of Ireland, 1627. http://archive.org/details/annalsofclonmacn00mage.

Drachm or dram is a unit of mass represented by the apothecary symbol ʒ, or ʓ,  and weighing approximately 3.89 grams. ½ dram is written 🝲.  As a measurement of volume a fluid dram is 3.55 mL

Draught is a subjective term that is derived from the Old English term dragan which means to pull draw or drag. It boils down to meaning how much you take into your mouth and swallow in one drink. We will let this one stand as is.

Handful - Transcriptionists have generally settled on a handful being approximately ½ cup in volume. It is abbreviated to M. in apothecary text. These are not influenced by the mass of the herb. The most important thing in this case is to pay attention to keeping the ratios the same.

Ounce- A troy ounce as a unit of mass is approximately 31.1 g represented by the apothecary symbol ℥  As a unit of volume it is written  fl ℥ or f℥ and  is the equivalent of 1.097 in modern ounces or about 33 mL. Half an ounce is written this way. 🝳

Pint – Pints were notoriously irregular between regions ranging from a half liter to just over 1 litre. On this blog I am going to use a modern pint which is about 473 mL.

Quart- A quart is a unit of volume equalling approximately two pints as discussed above. A modern quart is about 946 mL

Scruple -A unit of mass equal to 20 grains (1.296 g) and indicated by the apothecary symbol ℈.

Spoonful - The standard spoon back then was close to a modern tablespoon or about one-half ounce. On this blog I  will use tablespoon as a standard unit. 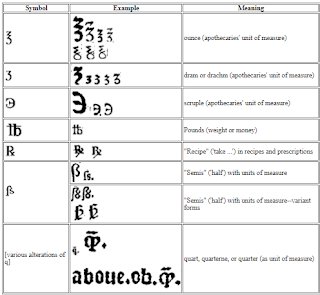 Pipkin is a small cookpot made of earthenware or metal.

Trub is the deposit of yeast precipitate at the bottom of your fermentation vessel after the primary ferment.

Tundish is a funnel used in the production of ale. It was sometimes to concentrate inhalation of medicated steam.

Verjuice or uergis is the name given to the juice of unripe grapes or less often apples or crabapples.

Wardons was another name for pears.

Antimony is an element but the word was sometimes used to refer to the sulfide mineral stubnite comprised of antimony and sulphur. Flowers of antimony (arsenic trioxide), is a powder left after roasting orpiment or realgar. Antimony and arsenic have similar properties were frequently confused with unfortunate results.

Calomel was a purgative made by combining mercurous chloride and metallic mercury. They would combine the two and simmer them in a iron pot with a lid and the scrapings from the inside of the lid were powdered.

Flowers of sulphur is a light yellow crystalline powder, made by distilling sulphur that is still on the market today. Another name for sulfur was brimstone.

Flowers of zinc is crude zinc oxide scraped from the inside of chimneys made of zinc.

Hartshorn was the ground horn of a red male deer. In the past they would dry distill the ground horn to obtain oil of hartshorn which could then be processed into ammonium carbonate to be used as smelling salts.

Lime-water is a saturated aqueous solution of slaked lime.

Saccharo album which was sometimes abbreviated to sacchar alb. is white sugar. Do not make the mistake of assuming the use of inferior ingredients.

Soda ash is sodium carbonate formed by various types of saltwort that grow on sea shores.

Spirit is the term used for an essence or extract that can be distilled from another solution. It does not necessarily refer to an alcoholic product the way we think of it today.

Spirit of sal ammoniac is the more modern form of smelling salts and is still on the market today.

Tartar or tartar of wine is potassium hydrogen tartrate and when they purified it into small white crystals it was sold as cream of tarter.

Terebene was a clear liquid that was the result of mixing sulphuric acid and oil of turpentine. It was a cough remedy often mixed into cod liver oil because English people liked to torture their children. See also treacle and brimstone.

Thion hudor was deep orange-red liquid that was made from boiling flowers of sulphur with slaked lime.

Touchpaper is basically tissue paper that has been soaked in a potassium nitrate solution and is easily ignited.

Venetian treacle refers to a preparation known as theriac andromachus or theriac venetian.

*Vitriol with no further qualification usually means sulfuric acid as does oil of vitriol, spirit of vitriol and oil of sulfur per campanum.

White arsenic is arsenious oxide made by purifying the soot of arsenic.