Posted by Stephany Riley on April 03, 2019
I tend to use the term lady experimenter a lot. People who know me and have seen my apothecary room complete with fancy microscope are sure to understand why I love the concept. So in the interest of providing some context I thought I should introduce you to them.

To start out with I am going to briefly explain the political landscape. Between the years of 1536 and 1541 Henry VIII began the legal procedures which led to the dissolution of monasteries, priories, convents and friaries in England, Wales and Ireland. Coincidentally (not really) this is the same time the English Parliament declared witchcraft a capital crime.

This created a kind of a vacuum in healthcare as monks, nuns, and the tenant peasants of the monasteries and abbeys had been very much involved in the growing of herbs and the production of herbal preparations. While hospitals eventually cropped up to replace the monasteries as charitable facilities, they only provided care for the poorest populations and people with no family to care for them. Few people of means would have consented to be going to the hospital.

I don’t really find it that shocking that soon after men started publishing books instructing women on household management that focused a great deal on growing herbs and preparing medicines. They also started designating rooms in their home for the processing and preparation of medicinal herbs, which are called still rooms due to the frequent use of alembic type stills to concoct remedies.
I suppose they reasoned who would be better to fill that vacuum and take charge of this work, than their live-in free labor? Caring for their family’s illnesses and injuries became a necessary part of a housewife’s subsistence work.Women were encouraged to experiment and expand their gardens as they learned more about the art of physick. In 1617 William Lawson wrote: 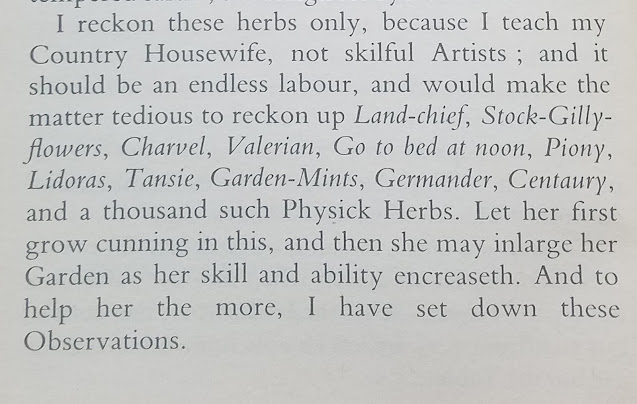 This is basically the advice most herbal educators today would give. Start with simple herbs, increase your knowledge, and expand your garden accordingly. As an aside, do you see the use of the word “cunning” here? It is not uncommon. I think that a bit much might have been made of“cunning folk”, but I haven’t researched that as fully as I would like. I will get to that post eventually.

I am not proposing that this was a new practice. Late medieval cookbooks often contained medicinal receipts and there are a few examples of this sort of instruction occurring prior to this time. Le Menagier de Paris is one example. It was written in 1393 by an French man instructing his young wife on such matters. I am just suggesting that women were being encouraged to step up their game.

One woman who has been discussed much by historians due to a detailed autobiography she wrote was Lady Grace Mildmay who was born in 1552 C.E. According to her biographer, “Grace learned skills conventional to her sex, class and religion: music, arithmetic, letterwriting, needle-work, basic surgery and physic, and daily scripture reading – a curriculum intended to produce pious and useful domestic companions to men.” Isn’t that a polite, scholarly way of saying they were educated to serve as unpaid labor for their husbands?

Among Lady Mildmay’s contemporaries were Lady Margaret Hoby, Lady Anne Halkett, Lady Ann Fanshawe, Lady and many others. Our lady experimenters documented their receipts and preparation methods in handwritten books along with other household receipts which they then passed along in their family to be added to by daughters and sons. 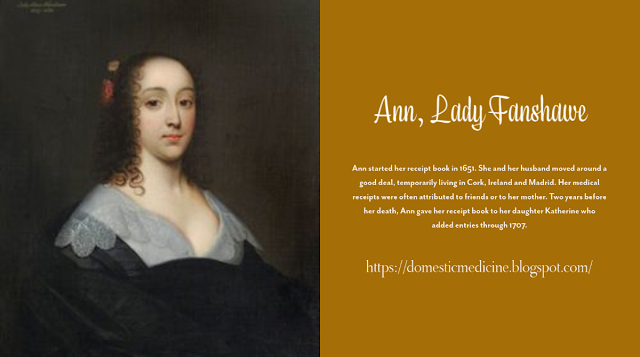 Historian Eleanor Rohde might be the first person I read writing about them in a way that didn't dismiss them as mere cookbooks. “These stillroom books, which are a modes of literature in themselves, are more nearly akin to herbals than to cookery books, with which they are popularly associated. For they are full of the old herb lore and of the uses of herbs in homely medicines.” I will expand on these books in the next entry.

Now before we feel too sorry for these women, keep in mind they were part of the upper class. They had servants around to do the strenuous work for them including housekeepers, gardeners and still maids. Our lady experimenters served a supervisory role and seemed to be collectors and keepers of the knowledge.  By the Regency period very wealthy households might have two still maids who were assigned exclusively to the still room and supervised directly by the housekeeper. They were generally some of the highest ranking servants in the household.
Another interesting historical note is that as women became more literate a shift occurred. The published household books that had previously been authored exclusively by men started to be authored by women, as well. Examples include:

A Choice Manual of Rare and SelectSecrets by Elizabeth Grey (1653)
The Queen’s Closet Opened by W.M and Queen Henrietta Marie (1655)
Natura Extenterata by Althea Talbot (1655)
The Ladies Directory by Hannah Woolley (1662)


Of course you never hear these women's names mentioned at herbal conferences unless you have been to one of my classes. They would have you think only men were writing about herbal preparation during this time. One of my goals in writing this blog is to set that right.
[1] Hunter, Lynette. “Women and Domestic Medicine: Lady Experimenters 1570-1620.” In Women, Science and Medicine 1500-1700, edited by Hunter, Lynette and Hutton, Sarah. Gloucestershire. England: Sutton Publishing, 1997.
[2] The Goodman of Paris (Le Ménagier de Paris), A Treatise on Moral and Domestic Economy by a Citizen of Paris (c. 1393), trans. Eileen Power. New York: Harcourt, Brace, & Co., 1928.
[3] Randall Martin, "The Autobiography of Grace, Lady Mildmay," Renaissance and Reformation 18
(1994): 5.
[4] Hellwarth, J.W. "Be unto me as a precious ointment": Lady Grace Mildmay, sixteenth-century female practioner." Dynamis 19 (1999): 97-101.
[5] Rees, John. “Digitizing Material Culture: Handwritten Recipe Books, 1600–1900.” Circulating Now from NLM (blog), April 13, 2017. https://circulatingnow.nlm.nih.gov/2017/04/13/digitizing-material-culture-handwritten-recipe-books-1600-1900/.
[6] Eleanour S. Rohde, The Old English Herbals (London: Longmans, Green and Co., 1922), 174. I know Rohde is not the most academic author to quote, but I love the phrase “homely medicines” and she’s not wrong in this.